The redefined Joomla release strategy that was recently introduced emphasizes the creation of regular updates in shorter timeframes than before as this will ensure that the Joomla CMS is receiving continuous development and there is the potential for a longer support period for major version releases, compared to the unwieldy LTS/STS release setup that was used before. All the feature proposals for Joomla 3.4 were originally submitted by May 28, 2014 and the release-candidate version was scheduled for release by 30th July 2014, but as is often the case with open-source, voluntary development things didn’t go according to plan, with plenty of bugfixing work slowing down the project, as well as the team’s commitment to maintenance released for the current Joomla releases adding another layer of work to slow down update schedules. 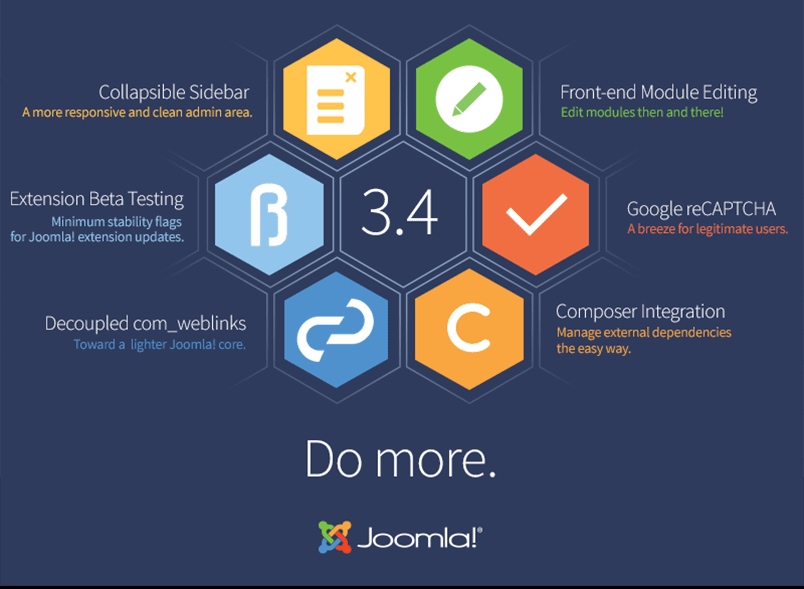 However, things have got back on track over the New Year, and the Joomla! Development team are getting things back on track with a new timeline and a brand new beta release nearly ready to go. So what kind of features can you expect from Joomla 3.4?

Joomla 3.4 focuses on 4 main new features, though most average users will only be able to notice 3 of them. The main idea of this release is not to extend Joomla, but to begin the transition to the new release cycle and provide core improvements in the Joomla package.

This is the first step in de-coupling components from Joomla. At present Joomla contains several components out of the box, many of which are not necessarily needed by the average user. Since these additional CMS components add extra weight to the Joomla package, but aren’t necessarily put to any use, then they serve to make the overall package heavier than it needs to be. Weblinks is a great example of this issue, and so from Joomla 3.4 com_weblinks and all associated modules and plugins will be removed from the Joomla installation package. This is a great first step in making Joomla more user-friendly and making the package lighter.

But don’t worry if your a fan of the weblinks component; it will be still available for use in your Joomla installation, just not included in the core. Instead, it will have an installable package like your average Joomla extension. The GitHub project is already created and every component removed from the core will be available in its own repository inside the Joomla project. What’s more, weblinks should also be added to the JED (Joomla Extension Directory) in a new category for removed Joomla components, including any removed in the future. This extra step will make it easy for user who still require the functionality of the removed components to get them installed and running with just a click from the Joomla administrator area.

Microdata in Joomla was introduced with the release of 3.2, and Joomla 3.4 will continue implementing this feature in Joomla’s core layouts. Since Joomla! 3.2 microdata has been available in most of the popular core components like com_content and com_contact so it’s likely that these features will be added to the few components that don’t yet have it. You can read up on microdata and why it’s important for keeping your content understandable not just for your users, but for machines like the Google Search bot to help improve your standing in search engines.

The title says it all about this new feature. In Joomla! 3.2 you may have noticed small ‘edit’ icons appearing in every module when you are logged in on the front-end; clicking them would redirect you to the module configuration page in the back-end. Joomla 3.4 will change this behaviour to allow you to modify modules without the need to access the administrator area, which will be an easier solution for beginners. This feature will also be useful if you don’t want to share administrator access with users who need to have access to module configuration. With this change and the default ACL (Access Control List) features combined, Joomla will be able to provide nearly limitless control over who accesses your site, and what they can do.

This feature will not be of any interest to non-developers, but it’s still something that developers will surely appreciate. In short, it’s huge improvement for managing external dependencies in Joomla like the Joomla! Framework and PHPMailer, but nothing which will be visible for a regular Joomla user.

Spam is like heavy rain; irritating if caught unaware, but with the right umbrella it won’t ever bother you. One of the most robust tools for stopping spam is reCAPTCHA, otherwise known as those fiddly “Type the numbers” or “Discern the nigh-impossible to read text” boxes that act as gatekeepers to posting comments, registering and online forms in general. Though occasionally a challenge, they’re still a great way to protect a website from the horrors of spam.

Thankfully, Joomla! 3.4 now includes support for Google’s new no CAPTCHA CAPTCHA API in the login and registration forms. This updated version of reCAPTCHA can run a simple check to test if a visitor is a bot with a single click, saving a huge amount of time for your users. In the event that reCAPTCHA cannot determine if the user is a bot or not, it will default to the standard “Type the numbers/letters” style, giving your users a smoother site experience while still keeping you protected.

→ See it in action here

Don’t worry if you’re not looking to update reCAPTCHA just yet; Joomla still supports the older reCAPTCHA 1.0, so your site will work just fine without updating.

The second new addition the delay brings is a move to standardize all the core Joomla language strings in en-GB, which is the official language of Joomla. This helps keep things consistent and balanced in the core, and provides a standard framework for translations to start from; it’s not a major change for the average user, but it will keep Joomla consistent for more comfortable translation and expansion across new languages.

The Joomla team have really been pushing themselves for this release; since the initial announcement back in 2014 they’ve been steadily seeing a trickle of new features being added to the 3.4 release, with a lot of focus on getting security even more effective. As well as the additional protection afforded by reCAPTCHA 2.0 they’ve also seen fit to implement UploadShield code into this release. What does UploadShield do? It’s a remarkably clever way to detect and protect against harmful uploads by examining the file being uploaded, from the superficial, like the filename, to the more in-depth, such as examining the file contents. This kind of protection is an extra layer of defense against malicious uploads, but that doesn’t mean you shouldn’t stop being careful. For complete protection, make sure to only upload packages from reputable sources; this new feature doesn’t give you free rein to upload whatever random packages you find on the web!

Has the promise of all these nice new features got you interested? Then you’re in luck, since the Joomla! Project and the Production Leadership Team released the stable version of Joomla! 3.4.0 a while back, the latest release in the version 3.x series. Currently if you want to stay up to date you should pick up the latest Joomla 3.4.2 release, which includes some useful security updates to help you protect your site.

If you fancy getting into this new Joomla release, there is no need to wait any longer as not only has Joomla! 3.4 already been released, they’ve already released two extra security updates for an even safer website, bringing Joomla to version 3.4.2. Take advantage of the great new features that put your site one step ahead of the competition and get it up to date by downloading the update now:

All our modern themes have been updated already to be compatible with all Joomla 3.4 releases, so you can feel safe when you purchase any of our releases as they are ready to go! We do hope the above article convinced you to update your website; Joomla has been expanding and improving in leaps and bounds and now really is the time to move to the 3.x series if you’ve been holding back on updating and sticking with Joomla 2.5; The new Joomla version is more stable than ever before and boasts so many great new features that upgrading is the best option, and with Joomla 2.5 support now officially dropping off all the interesting developments will come in Joomla 3’s future. We’re happy to inform you that all our products are up-to-date and ready to download right now, so you can have a beautiful, functional website that can also take advantage of the great additions to the newest versions of Joomla!

Interested in checking out some great themes? Have a browse through our extensive Joomla 3.4 template collection